I once read that philosophy is, “the attempt to define the relationship between man and God and the individual and society”. This seems to me a satisfyingly concise, comprehensive and convincing definition and, I Am Not a Number, is my attempt to engage philosophically with these central issues of the lived human experience as they occur in the real world1 – rather than in the abstracted and theoretical domain of much professional philosophy.

For me, the primary duty of a free citizen, in a free country, is to think for them selves; to make their own moral choices based on conscience and principle. But I also believe that human-beings are first & foremost social animals who have always, and will always, live together in social communities; and that central to the experience of a happy, healthy human-being is working collaboratively with others for the common good.

Contemporary liberal thought sees these central aspects of human nature as contradictory. But for me they are entirely consistent and indeed mutually dependent – the individual is a social concept and without individuals there is no society. This recognition has led me towards a form of Libertarian Socialism or Social Anarchism that appreciates that the freedom of individuals is central to the higher aim of the collective good and which fears the tyranny of social convention and the free market as much as the totalitarian state.

I fear bureaucratic Statism as much as I fear rampant capitalism.

But for me Anarchy is not a utopian Meta-narrative that explains everything and points to system of government that would free all men, for all time. Indeed, the idea of an Anarchist theory of a government would seem to be self-contradicting.

All power is corrupting whether it be the power of a multi-national corporate executive or the power of a government bureaucrat. For me Anarchism is a dissenting and resisting disposition towards all power whether it be liberal, commercial, capitalist, socialist, communist or fascist.

All men are born free and equal. All power is illegitimate. As individuals we can only acquiesce in our own subjection. As an Anarchist I insist on being free; I insist on thinking my own thoughts and making my own moral judgements. No one has the moral right to order me to do anything. I will decide which orders I will obey and those I will not.

Throughout human history the powerless have been engaged in a struggle for liberty from the oppression and exploitation of the powerful and contrary to the ludicrous pronouncements of the idiot Francis Fukuyama, there is no reason to believe that this will ever end.

Power has to constantly be held to account and always will, whether it be in the home, the workplace, the country or the globe. 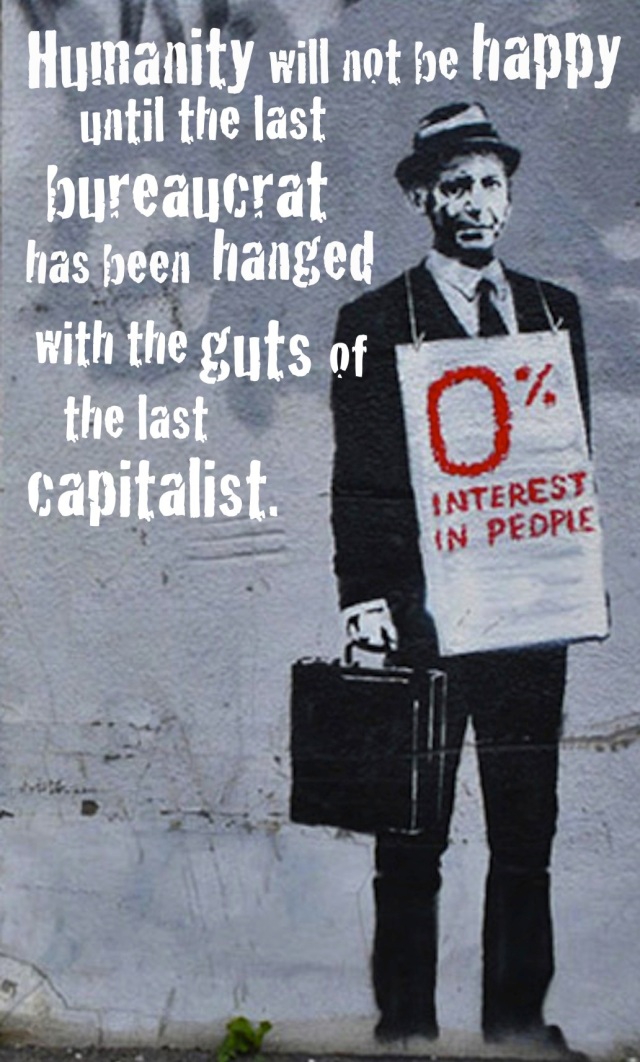 The quote comes from a telegram sent on the 17th May 1967, by the Situationist’s leading the Occupations Committee of the Sorbonne, to the Communist Party of the USSR.

In full the telegram said:
SHAKE IN YOUR SHOES BUREAUCRATS STOP THE INTERNATIONAL POWER OF THE WORKERS’ COUNCILS WILL SOON WIPE YOU OUT STOP HUMANITY WILL NOT BE HAPPY UNTIL THE LAST BUREAU- CRAT IS HUNG WITH THE GUTS OF THE LAST CAPITALIST STOP LONG LIVE THE STRUGGLE OF THE KRONSTADT SAILORS AND OF THE MAKHNOVSCHINA AGAINST TROTSKY AND LENIN STOP LONG LIVE THE 1956 COUNCILIST INSURRECTION OF BUDAPEST STOP DOWN WITH THE STATE STOP